The quality hotel market in the capital continues to show growth: in the first quarter of 2017, the number of rooms rose by 40% (against 34% a year earlier and 31% in 2015). The current figure even surpasses the last stable in the Ukrainian capital market in 2013, when 39% of the rooms were occupied. At the same time, the average tariff shows different dynamics in currency and hryvnia: if the dollar index decreased from $ 151 in the first quarter of 2015 to $ 148 in 2016 and $ 141 in the first quarter of 2017. The hryvnia rates from January to March increased by only 8 hryvnia in comparison with the previous year and by more than 600 hryvnia in comparison with 2015. This is probably due to the continuing weakness of the national currency. 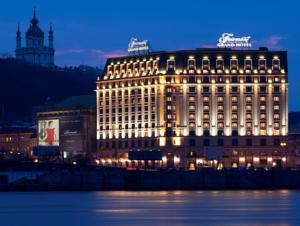 Such data and conclusions were shared on April 26 by the head of the hotel business department of the international company JLL Tatyana Veller. "We attribute the growth of the quality hotel market in Kiev to several factors: firstly, the stability of the political situation for a fairly long period of time; Secondly, the gradual return of business to the capital, which takes on new realities and understands the unproductiveness of further expectations, "the press service of the JLL quotes her.

The positive dynamics in the hotel sector is confirmed by other experts. "Since 2015, there really is a gradual increase. And the trend spreads to the first quarter of 2017. Not so long ago, we partnered with the inspection of all five-star and many four-star hotels in Kiev, a number of objects was loaded by 70-80% or more, "said Dmitry Tantsyura, executive director of the Albatross-Travel group of companies. At the same time, the interlocutor notes that the first quarter is not always indicative, since for Kiev this is traditionally a "low" season. Although this year there is a noticeable influx of foreign visitors to the capital - this is due to a large number of cultural and business events. The increase in the average hotel load compared to previous years is confirmed by the auditor on the certification of hotel and restaurant services Lyudmila Meshcherskikh. "It is noteworthy that this is taking place against the background of a significant reduction in the number of guests from Russia - they are replaced by Ukrainians and guests from European countries," the interlocutor said.

It is logical to assume that in the second quarter the number of rooms will increase. This will contribute not only to the warm season, but also to Eurovision-2017, the final of which will be held in May. As of April 21, about 80% of the rooms have already been booked in the capital hotels at the time of the song contest. This in a comment 44.ua told the head of the tourism department of Kyiv's administration Anton Taranenko.