It seems that we have already learned the dates of the semifinals and the final of the "Eurovision-2017" as a multiplication table: the main events will be held on 9, 11 and 13 May. There are also day and evening rehearsals, which cost an order of magnitude less, but in principle, they almost do not differ from the main ones. Nevertheless, in Kiev, starting from April 30, it will be fun and musical not only in the International Exhibition Center.

Eurovorodok (a place where fans and guests of Eurovision will hang out and gather) will be located on Khreshchatyk - from Proreznaya Street to Bogdan Khmelnitsky Street. His work will begin on May 4 and will last until May 14.

In the days of the semifinals and finals, you can watch the broadcast of the show on screens. Every day in the Euro-town (at the same time up to 15,000 spectators can be in this location) food courts will work, concerts and a variety of entertainment programs will be arranged.

April 20 on the stage will begin technical rehearsals with extras that will last 4 days. This will allow you to adjust the technique and lighting before the arrival of participants. The next six days will be rehearsals for the opening and closing of the show, as well as the so-called interval acts (pauses, during which commercial screens are broadcast on the air of the channel). Already on April 30 the first delegations and representatives of the countries participating in the Eurovision-2017 will start arriving in Kiev.

Help the guests navigate the place will be 900 trained volunteers.

The official opening ceremony will be held on May 7 at the Parkovy Park. The red carpet is an integral part of the discovery - on the same day near the Mariinsky Palace. It will be the longest in the history of "Eurovision" - 265 m. The producer of the "red carpet" ceremony and opening is the Ukrainian theater director Sergei Proskurnya.

All the action on the red carpet will last two and a half hours. At the same time, delegations from 12 countries will be able to attend it. Traditionally, during the ceremony, the contestants give short interviews for the media and autographs for the fans.

Having passed along the red carpet, representatives of all countries participating in the contest will leave for the Parkovy Exhibition Center, the official site of the opening ceremony of Eurovision-2017. On the roof of the center each delegation will raise the flag of its country, after which the solemn part of the event will begin.

A live broadcast of the action will be available to all comers on the screens in the Euro Town.
Photo: original.in.ua

The official fan zone will also be posted on the Post Square. For this location, they invented an international karaoke festival for Eurovision. His program will be based on the history of the song contest since 1965. Also, everyone who wishes can sing the favorite songs, which sounded at the competition, under the minus one.

Euroclub is one of the official locations where closed parties will be held for the delegations of the participating countries, including after the rehearsals and performances of the contestants. Located in the congress and exhibition center "Parkovy" (a shopping center with the famous helicopter pad of Yanukovych). Will work from 1 to 14 May. The first week - on the same floor, since May 7, after the opening ceremony - on two floors. Holds about three and a half thousand visitors. 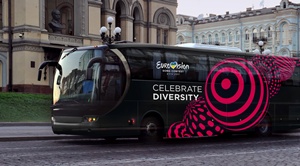 Hiking excursions for delegations will be carried out by the excursion bureau "Interesting Kiev", buses - City sightseeing bus. In the period from April 30 to May 14 for delegations it is planned to conduct about 16 excursions around Kiev.