Secrets of underground cities in the world

Under the ground of humanity were buried long ago. To protect themselves, to hide their secrets, to prepare for the inevitable. Examples include dugouts, underground tunnels, catacombs, bunkers and even entire cities. 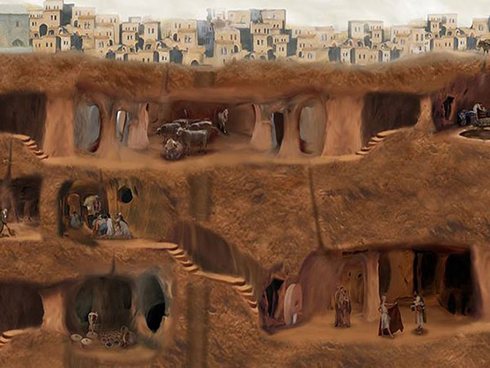 Turkey. Derinkuyu, Cappadocia. In 1960, archaeologists accidentally discovered an underground village of Derinkuyu, where there are up to 18 levels. Presumably, it was built in the 8th century BC by refugees fleeing from enemies. It was possible to live a long time without fear of a long siege. Who were the builders, from whom they were hiding, which they were pursued, scientists still can't answer.

France. Nari. In the old days in the North of France by the Romans under forest made of stone quarry. In the middle ages the quarry, the locals were using as a shelter where you could hide from the mercenaries and armed groups. Built in the caves you could hide 3 to thousands of people, there was a hollowed-out wells, chapels, bakeries, and even stables.

Poland. Mine Wieliczka. Mining salt for seven century, the people deeper and further capialist in the ground. The empty space gradually began to settle down, turning in a seven tiered Palace. The tunnels stretch for 300 kilometers and are located at depths greater than 200 meters.

Ethiopia. Lalibela. In the African country preserved the memory of king Gebre Meskel Lalibela. His reign falls in the period between the 12th and 13th centuries. The king of the dynasty was Sahibul reserved food fair in his actions and in the thoughts of the ambitious ruler. Once visited Jerusalem, he began to build a semblance of the Holy city. Of course such monuments in the Eternal city, had not, but the catacombs, deep into the ground — a large number.

Italy. Orvieto. On the hills of Italy is an ancient town of Orvieto. It is not only interesting architectural structures located on the surface, but under the earth. Started to go here by the ancient Etruscan tribes. Each generation expanded, enhanced and ennobled the dungeon. Until it turned into a sort of city.

Jordan. Peter. Perhaps Peter is the most famous city carved in the rocks. It is hard to call underground, as it seems to be built on sight. However, recent excavations have shown that the speed and space go deeper and further into the rocks. Once on site, Petra was seething commercial life, while ways of transporting cargo has not shifted.

The bunker in Burlington

USA. Burlington. During the cold war in all corners of the world have built shelters, they are usually intended for high-ranking officials. In the us Burlington was dug and equipped with underground bunkers, representing a complex that can accommodate up to 4 thousand people. There are offices, medical offices, cafeteria, and radio station and Studio of the BBC. In 2004, the building was demolished.

China. Beijing. On Chinese large-scale plans and fears is legends. In 60-70 years they capialist in the ground, fearing nuclear war. Under the capital was established shelter on such a scale that there could live for half a year more than a million Chinese, eating and having fun, not coming to the surface.